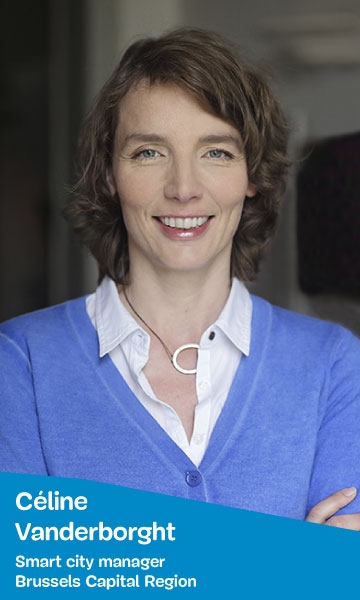 A smart-city manager for the Brussels-Capital Region

In October 2015, the Brussels-Capital Region hired a smart-city manager in the person of Céline Vanderborght, to help speed up the transformation of our Region into a smart city and advise the regional government in this area. Here, she discusses her task.

At a time when the smart-city concept was still extremely remote, the Brussels-Capital Region had already begun to lay its first foundations, for instance by creating the administrative website IRISbox. This was in the early 2000s and Céline Vanderborght was already playing an active part in these developments as the e-government manager at the Brussels Regional Informatics Centre (BRIC), a post she held until 2006. A commercial engineer and graduate of ULB-Solvay, Céline Vanderborght then lived outside Belgium for a few years and completed her training with a master’s degree in urban planning and sustainable development at the University of Geneva. Today, as smart-city manager, she is returning to the area in which she gained her first professional experience in the service of the Region.

How would you define a “smart city”?

?What interests me in a smart city is the actual city. The way I see it, “city” should always take priority over “smart”. The challenges cities have to meet are huge: population, resilience, energy, mobility and so on. Technology is now contributing its solutions to these issues via the smart-city approach. This takes the form of a large number of projects, ranging from new modes of transport to innovative applications for use in daily life, not forgetting fab labs, which are the test benches where a smart city tests the citizens’ requirements. Sometimes, the citizens themselves test and adopt new platforms which are completely different from traditional services, such as Blablacar, Uber, AirBNB and so on.

According to you, what are Brussels’ strong and weak points as a smart city?

Like all people who travel to, from or inside our Region, I have to admit that traffic is one of its weaker points. Like many other European metropolises, Brussels is suffering from increased congestion due to automobile traffic. This affects us all, at all levels, and has negative economic, social and environmental consequences. Mobility issues are one of the main reasons companies are relocating outside the Region. As far as pollution is concerned, fine particle concentrations, which have a very negative effect on health, are high. Finally, from a city-planning and social viewpoint, cars take up a great deal of space, to the detriment of other modes of transport, and above all of other urban features such as housing, trees, playgrounds and small businesses. The smart-mobility projects are based on smart-transport systems which improve traffic organisation and forecasts ; on multimodal applications which use single integrated payments ; and on coordination between connected objects and the various forms of transport (such as lights that turn green for emergency vehicles, cycle tracks that light up, speed limits that adjust to pollution levels, etc.). In terms of population, Brussels is atypical by Belgian standards in that it offers a high number of highly qualified jobs, while at the same time a large part of the workforce is underqualified and youth unemployment is high. That, in my view, is one weak point which could be turned into a strong one. Many IT positions in our region are not being filled. It is up to us to offer training courses which attract our young people and enable them to acquire qualifications and find jobs. Finally, Brussels’ strong point is its ecosystem of SMEs and start-ups, which must be encouraged at all costs: there is a direct link between their creativity and the attractiveness of the Region. Our ability to manage open data and big data is a real asset when it comes to positioning Brussels as a smart city. Our second strong point is our computer infrastructure. For several years now, the Region has been setting up major pillars on which we can now build new services such as the connectivity of schools, free wi-fi, the IRISbox website and FIDUS, a highly efficient secure platform which enables various authorities to exchange private data and which was set up last year by the BRIC.

Which are the smart cities that inspire you?

?In Belgium, I would say Ghent, which is a genuine ecosystem of innovation. Abroad, Lyon has launched a number of large-scale projects, including the real-time use of big data to manage mobility. Finally, I like Vienna’s approach, which accords considerable importance to inclusion and education.
Réflexions autour de la Smart City, an article by Céline Vanderborght on the BRIC blog (in French)
Keywords :
Relevant administration(s)
Back to news