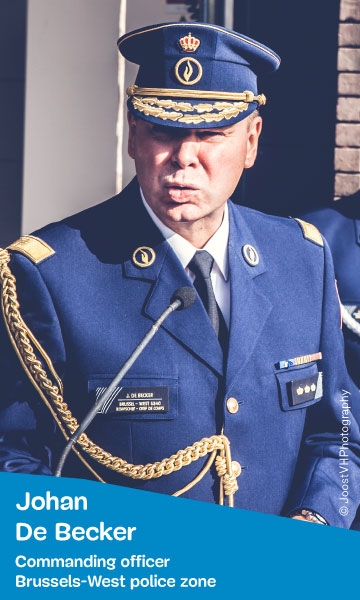 “By definition, sharing CCTV is a smart-city approach”

In July 2015, the Brussels-West police zone joined the Brussels-Capital Region’s smart-city project by being the first to implement the regional CCTV-sharing project. Six months later, the commanding officer of Brussels-West, Johan De Becker, congratulates himself on having been a pioneer on behalf of the entire regio

CCTV cameras now form a part of the urban landscape in their own right. Although they already meet police requirements, they have an even greater role to play in smart cities. Indeed, the contribution of cameras to urban management can help improve mobility or public cleanliness. Video-image sharing is at the heart of this project, which was initiated by the Brussels Regional Informatics Centre (BRIC) and the purpose of which is to enable a number of government departments to share a CCTV platform. The commanding officer of the Brussels-West police zone, which has pioneered this project, shares this cross-cutting vision.

How does this project mesh with the vision of a smart city?

Johan De Becker: By definition, sharing CCTV equipment and technologies is a smart-city approach. CCTV connections have been made between departments which otherwise would all be beavering away in their little corner. Not only are we sharing with other police zones, but also with STIB/MIVB and Bruxelles Mobilité/Brussel Mobiliteit and others. For instance, in the case of a demonstration that begins in Molenbeek, passes through the city of Brussels and ends at the Gare du Midi, that is, in the Midi/Zuid police zone, all three police zones can watch it easily and effectively from their respective dispatching centres. Other departments are also concerned by this platform: for instance, our videos can help the municipal cleaning services track fly-tipping.

In which actual, concrete way does this help your police zone?

First of all, the various tools used by the BRIC are completely reliable, for instance the connection between the cameras and our dispatching centre. The video flows now pass through the regional network, IRISnet, which has given us a reliability which had been missing up to now. Also, the quality of the images, especially of the archival footage, has improved a great deal. We are now perfectly equipped to watch images in real time 24/7 as well as use archival footage, whether on our own behalf or that of other security or judicial departments. Finally, this system is especially intuitive, which means people can learn to use it fast.

Which developments do you foresee for the future?

We have several projects. We plan to open a crisis cell in addition to our dispatching centre, so as to be able to access images at times of emergency. We also expect a great deal of the software that adds a layer of smartness to the images, for instance automatic number-plate recognition (ANPR) systems. By interconnecting with databases, they enable patrols to identify vehicles reported as stolen or uninsured or that are being searched for. This software must also be able to go back in time through our archives to determine whether a suspect vehicle has driven through the police zone.

144 cameras and 20 officers The Brussels-West police zone covers the municipalities of Berchem-Sainte-Agathe, Ganshoren, Jette, Koekelberg and Molenbeek-Saint-Jean, i.e. a total 18% of the population of the Brussels-Capital Region.   It is the first to have used the tools supplied by the regional CCTV-sharing platform. The police zone operates 144 cameras and will be using 300 by 2018, including almost 160 in Molenbeek alone. Around 15 male and female police officers work at the dispatching centre in shifts. Other officers are in charge of making images available on demand, which brings the total to about 20.