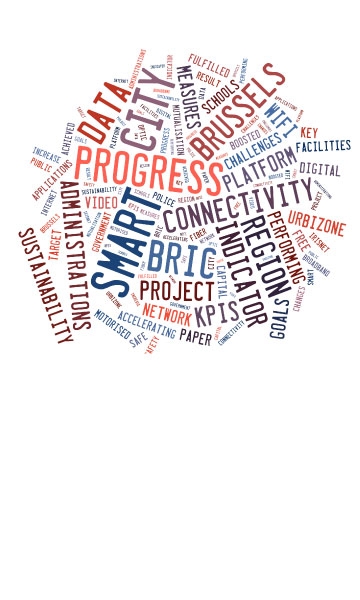 Seven indicators are used to measure the progress of the smart city works set up by the Brussels Region Informatics Centre (BRIC). In 2015, their average value was 66%. The star project is the Urbizone wifi project, the extension plans for which have already been exceeded!

To set oneself smart city goals is a good thing. To measure their progress is even better. For this reason, BRIC, the powerhouse of Brussels’ digital transition, has set up a number of key performance indicators (KPIs) to assess the progress of its smart city works in progress. The installation of free wifi facilities in the Brussels Region was the highest-performing project of 2015. BRIC has already exceeded the set target for 2019 by 24% by accelerating the extension of the Urbizone network. Another smart city flagship project, Open Data, has also made good progress in the Brussels-Capital Region and stands in second position: the goal of opening up the data of the Brussels regional administration has already been 88% fulfilled!

The third place in the BRIC smart city indicator stakes has been earned jointly by paper and motorised trip savings in connection with the use of IT applications and platforms by government departments, both of which achieved a result of 72%.
Another 2015 highlight was the first progress made by the video protection mutualisation platform further to the commissioning of the platform by the West police zone. The KPI, which was 10% in 2015, will probably increase considerably in view of the many changes to the programme of this project planned for 2016.

The seven smart KPIs correspond to 4 challenges identified by BRIC in its 2014 White Paper: connectivity, sustainability, the opening up of data and administrations to the public, and, finally, safety. For instance, in the case of connectivity, BRIC measures not only the extension of Urbizone, by also the progress of the lightning-fast broadband Internet connection of administrative departments and schools (Fiber-to-the-School plan) via the IRISnet optic-fibre network.
New (September 2016): Urbizone becomes wifi.brussels