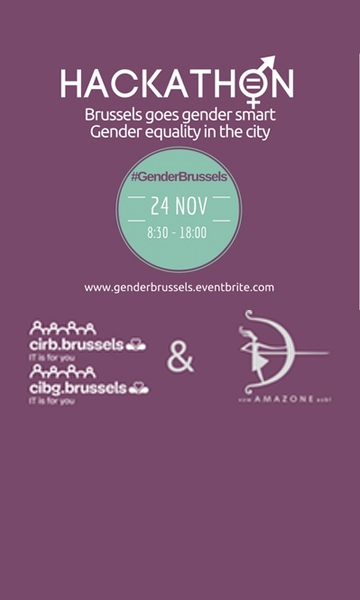 The results are in of the Open Data Brussels goes gender-smart hackathon.

The smart city must also be used promote gender equality. It is for this purpose that on 24 November the Open Data Brussels goes gender-smart hackhaton was held. Enthusiastic teams met the challenge with creativity. The first prize was awarded for an application that shares out domestic tasks within a couple, between housemates, etc.

How can gender equality in the Brussels region be promoted through the development of gender-smart applications based on open data? This was the challenge laid down, on Thursday, 25 November, to participants of the Open Data Brussels goes gender-smart hackathon.

Some 25 people answered the invitation launched by asbl Amazone and the Brussels Secretary of State responsible for Digitisation and Equality Opportunities for this hackathon which was the first of its kind in Belgium. The Brussels Regional Informatics Centre, for its part, hosted the event on its premises.

Grouped into 5 teams, the participants had one day to develop a concept meeting to the hackathon’s “pitch”. The winning team won with a project which should help a wide audience with an inescapable but never appreciated activity: doing the housework.

Given the name “Make Equity”, the winning project aims to create an application for sharing out the housework tasks between a couple, parents and/or the children of a family or housemates. One notable detail, the winning project was the work of one female and three male teammates, all students of the e-Business sector at EPHEC university college (FR). The winning team, composed of Soufiane Begdouri, Mohamed Laghmari, Chris Nkuanga Tsasa and Ana Valenzuela, received an MIC (Microsoft Innovation Center) bootcamp as their prize.

?Other noteworthy project: the application “ToiLet me Know” identifying public toilets in Brussels and offering private spaces the chance to include their toilets in the app. This project’s team, from the Brussels campus of the Vlerick Business School, had for its part developed a very detailed business plan. The team also came up with two awareness-raising and information games as well as a solidarity map for women.
Pictures of the atmosphere at the Open Data Brussels goes gender-smart hackhaton: Organised by asbl Amazone, the Open Data Brussels goes gender-smart hackhaton benefited from the support of the Brussels-Capital Region, Brussels Smart City, the Microsoft Innovation Center Brussels and the Institute for the Equality of Women and Men (IEFH), with also the participation of Interface3 (FR).