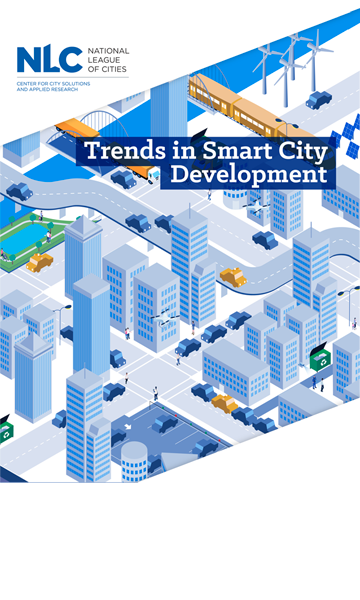 Connected devices, whose number is exploding, are contributing to forming the layer of intelligence being built by the smart city via the Internet of Things. The Trends in Smart City Development report, drawn up by the National League of Cities in the United States, identifies at least 17 of these communicating objects.

What do a CCTV camera and a solar panel have in common? A dustbin equipped with a filling sensor or a self-driving car? All these objects belong to the catalogue of equipment of the smart city connected to the Internet of Things (commonly abbreviated as IoT).
The association of U.S. cities (the National League of Cities) in late 2016 published the “Trends in Smart City Development” report which reviewed smart city projects in the different parts of the United States.
The report places particular emphasis on the Internet of Things which makes objects smart, in particular by enabling them to communicate data between each other. What relationship do these objects have with the smart city? The report explains: “Smart cities are employing the same technology to connect their disparate utility, infrastructure, and public service grids, generating real-time aggregate data. This, in turn, can help cities manage their programs and services more effectively and gauge their impact immediately. The city of the future is an interconnected one, where devices communicate with one another in a constant stream of data that provides real-time information to the public and to the municipality.”

Applications of the Internet of Things in the Smart City

As examples of these connected devices, the Trends in Smart City Development report cites no fewer than 17 systems, some of which are already common in some cities and the others which soon will be.
Keywords :
Relevant administration(s)
Back to news