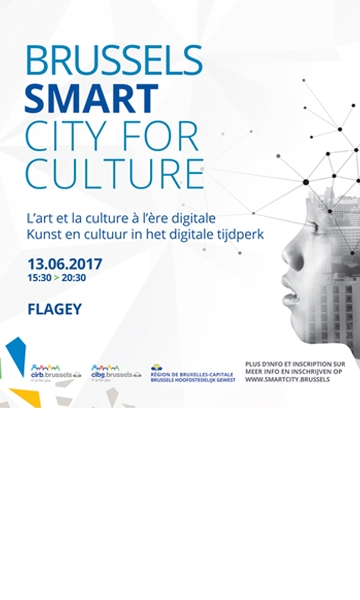 Some twelve speakers will be present on 13 June 2017, at the Flagey complex (Ixelles) on the occasion of the Brussels Smart City for Culture event!

On 13 June 2017, from 15.30 to 20.30, the new Brussels Smart City event will explore the place of art and culture in the digital age. The programme promises to be an exciting one as this quick overview shows. Besides the rich panel of speakers brought together for the occasion, Brussels Smart City for Culture will also gather various exhibitors in its Smart Village, offering several exhibitions and projections.

Keynote speaker and panel of experts

No fewer than twelve speakers will be present on 13 June 2017, at the Flagey complex on the occasion of the Brussels Smart City for Culture event! After an introduction by the Secretary of State in charge of the Digital Transition, Bianca Debaets, Marleen Stikker (Waag Society, Amsterdam) will be the keynote speaker of the event.
Céline van der Borght, Smart City Manager of the Brussels-Capital Region, will then take to the rostrum before handing over to a panel of four experts for a debate around the question “How does digital influence culture?”. The panel will be made up of Pascal Keiser (Digital Museum, Paris), Yves Bernard (iMal, Brussels), Liesbeth Huybrechts (University of Hasselt) and Alain Heureux (Brussels creative forum).

Participants will then have an opportunity to engage with the digital arts with the exhibitions “Double cultures:  Arts & Industry in the 21st Century”, “Man at work” (Julien Maire) and “Material Want” (Matthew Plummer-Fernandez & Jodi - Joan Heemskerk, Dirk Paesmans), as well as continuous projections of digital works by Jacques Urbanska (Transcultures) and Juliette Bibasse. The Smart Village will also host the booths of the Brussels Regional Informatics Center (BRIC), UNIC-3D, CultuurNet and Icon-Brussels.
The various workshops and round tables will explore the theme of the event further: At the end of the event, the artists of the FTRSND collective will present their modular musical Bétøn project.

Organised by the Brussels Regional Informatics Center (BRIC), Brussels Smart City for Culture is the second in a series of events launched around specific themes by the Secretary of State, Bianca Debaets. After culture this time and education in March 2017, the next theme of the series will be the economy. The aim is to seek out actors of society, listen to what they have to say and inform and inspire them.
Take the survey "Are you a streaming fan?"

Video of the event
Keywords :
Relevant administration(s)
Back to news