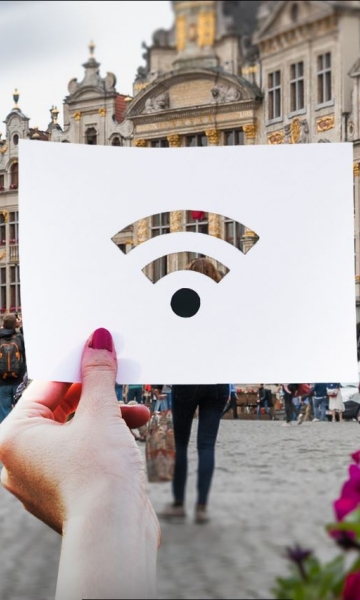 wifi.brussels is now available in the Grand-Place

The City of Brussels Wi-Fi network has been integrated with the regional network, wifi.brussels

All 29 hotspots in the city of Brussels Wi-Fi network have been linked up with the regional network, wifi.brussels. From now on, the Brussels Region has a single free public Wi-Fi network. The migration of the 29 hotspots was made possible thanks to an agreement between the Brussels Secretary of State for Digital Transition, Bianca Debaets, and the Alderman in charge of IT in the City of Brussels, Mohamed Ouriaghli. So wifi.brussels is now also available in the Grand-Place, Place de la Monnaie, Place de Brouckère, Place du Jeu de Balle and Place Emile Bockstael. The merged network is known as wifi.brussels and comprises a total of 165 access points scattered across the entire Region. Over a million user profiles have been created since wifi.brussels was launched at the start of the year.

“I am proud that we can at last offer the people of Brussels and visitors to our Region a unified Wi-Fi network. It is only logical to opt to merge the existing networks and use a single, clear brand name: wifi.brussels”, says Bianca Debaets, the Brussels Secretary of State for IT and Digital Transition. “I would like to thank the City of Brussels, Alderman Ouriaghli and his services for their very positive cooperation in this matter. The wifi.brussels network had already become the standard in the Brussels Region, but with the integration of access points across Brussels, Laeken, Haren and Neder-Over-Heembeek, we are of course able to provide an even more complete service. Offering free Wi-Fi to everyone helps to improve digital access to our Region which is essential for Brussels today and in the future.”


Mohamed Ouriaghli, Alderman in charge of IT in the City of Brussels says: “The new information and communication technologies need to fulfil a range of objectives: to make Brussels more attractive, narrow the digital divide as much as possible, promote sustainable development and achieve economies of scale. The merging of the City of Brussels Wi-Fi network with the regional network is clearly the logical progression of the Smart City dynamic that we introduced in the City of Brussels at the start of the parliamentary term. The idea is to use technology to make life easier for the people of Brussels and the merger certain achieves this goal. Users will no longer have to switch from one network to the other but will now be able to connect to a single Wi-Fi network: wifi.brussels. The Bru Wifi network that we launched in 2014 with the expertise of GIAL has proved to be a real success story which, I’m sure, will continue with the integration into the regional network.”

Renamed wifi.brussels at the end of last year, the regional network is extremely popular, with over 1,000,000 registered profiles.

From today, those who usually use Bru Wifi will be able to connect to wifi.brussels at the various access points. A single registration is sufficient to be able to browse easily via wifi.brussels.

wifi.brussels stands out from the other free alternatives in that there is no commercial interest and no advertising. wifi.brussels currently has 165 access points located in public places or buildings and scattered throughout the Region. The network covers the local Actiris antennae in the communes (Brussels employment office), local authority offices and 57 (pre-)metro stations. New access points are being created every month.