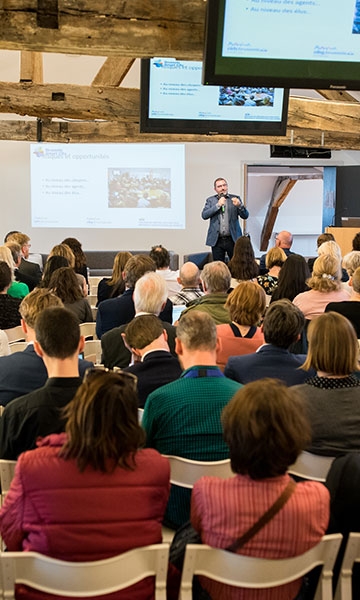 On Thursday, 19 May, employees of the Brussels municipalities and police zones as well as experts on the subject matter and other digital and governmental professionals gathered to attend the fourth Smart City event, which was the most interactive one up until now.

First up on the lively agenda: four interesting workshops centring around the following themes:
The municipality employees all showed great interest, proving that these matters are rooted in their current reality. This fact resulted in intense discussions and plenty of creative solutions as a response to the issues and bottlenecks related to the digital revolution in a governmental and regional-metropolitan context.

The plenary session was opened by state secretary Bianca Debaets and moderated by Wim De Vilder. The speakers were Bassem Asseh, assistant to the mayor of Nantes; Hervé Feuillien, director-general of the BRIC (Brussels-Capital Region IT Centre); Céline Vanderborght, Smart City Manager for the Brussels-Capital Region; Thomas Laureyssens, interactive creator, researcher, artist and lecturer at the LUCA School of Arts and Pieter Ballon, Professor of Communication Sciences at the Vrije Universiteit Brussel (VUB) and Director of the IMEC-SMIT research centre, who has held the he has held the Smart Cities academic chair since 2016.

The experts presented their view on the influence and evolution of digitalisation in urban areas through presentations illustrated with interesting, inspiring Smart City examples. Afterwards, they participated in a debate including short video clips of Brussels mayors who presented their municipalities’ digital initiatives. In short, there was plenty to talk about!

The Smart City event series will continue until the beginning of 2019.

News:
Survey "Is your municipality Smart?"