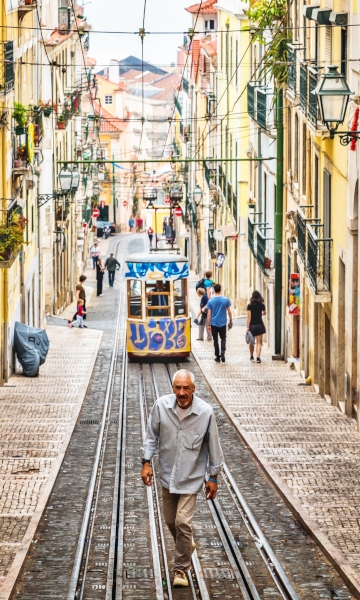 When imagining a Smart City, most people tend to think of a Northern European metropolis. And yet: the European Green Capital Award 2020 winner was... Lisbon. The ultimate accolade for a Smart City, which among others is one of the “lighthouse” cities of the European programme Sharing Cities.

Which city can boast of having cut its CO2 emissions by 50% (2002-2014) and, between 2007 and 2013, reduced its energy and water consumption by 23% and 17% respectively? The answer is Lisbon. The capital of Portugal (550,000 inhabitants plus some 400,000 daily commuters) is not merely one of Europe’s leading city-trip destinations, but has also become one of Europe’s smartest cities.

A strategic plan, Programa Operacional Regional de Lisboa 2020, has been set up by the metropolis on the Tagus. Its purpose is to deploy an innovative large-scale ecosystem. With 307 million euros to invest in concrete projects, its aim is threefold:  Among others, these aims should enable the city to halve the flow of vehicles that enter it daily. Indeed, the environment and climate are core components of Lisbon’s strategy. In 2015, Lisbon was the first capital city to join the Covenant of Mayors for Climate and Energy, by adopting an integrated approach to emission reduction and adaptation to climate change.

To achieve prompt results, Lisbon joined the European network Sharing Cities with a number of other famous smart cities such as London and Bordeaux. Lisbon’s town centre has become a “laboratory” for testing new approaches and technologies.

With an area of 10 sq. km and 100,000 inhabitants, this quarter comprises the city’s main historic and tourist streets. Lisbon has therefore elected to deploy innovative solutions and projects at its very heart, in three main areas:
In practice, 540 charging points for electric vehicles and 64,000 smart street lamps have been installed in the “laboratory” area. The city authorities have opened up 63 datasets into open data. A Sustainable Energy Management System (SEMS) has been set up to integrate and optimise energy flows, in particular by balancing supply and demand. Lisbon is also encouraging transition to renewable energies, including solar power, for instance by amending the town planning codes.

Finally, in the glum economic climate subsequent to the 2008 financial crisis and its impact on public debt, Lisbon, like all of Portugal, has decided to take a radical turn towards innovation by encouraging entrepreneurship. This soon bore fruit and the “City of Seven Hills” was awarded the European Entrepreneurial Region label in 2015. Its newly acquired title of European Green Capital 2020 stands as further confirmation of its renewal.