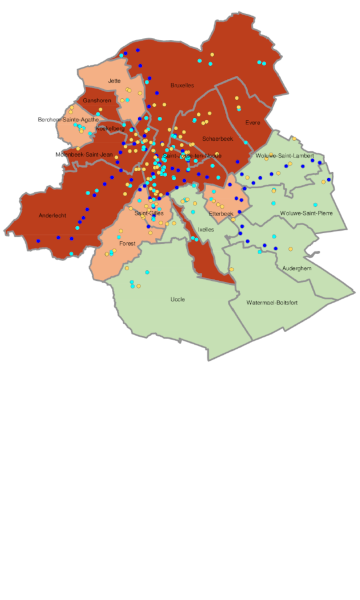 • 21 December 2018
In 2017, the cabinet of state secretary of State Bianca Debaets, who is in charge of informatics, digital transition and equal opportunities, asked the BRIC to carry out a survey analysing the digital gap in the Brussels-Capital Region.

The aim was to be able, on the basis of the observations made and the solutions proposed, to establish precise figures on the digital gap, break down these figures in terms of demography and geographic distribution, and consequently draw up a digital inclusion strategy, with clear targets (KPIs) and budgets.

The contract was awarded to a research team from the Catholic University of Louvain (UCL) on 27 April 2017. The survey was completed in November 2017.

The most important conclusion is that, just as in other cities, the less affluent population groups run the greatest risk of not having access to digital applications and therefore suffering from digital exclusion. The survey worked out a ‘vulnerability rate’ based on statistical indicators (gender, income, housing, etc.). The map below indicates the level of vulnerability in the Brussels-Capital Region:

The survey also highlights recommendations from the sector (pages 96-110) and, in its conclusion, puts forward a proposal for a digital inclusion plan in the Brussels-Capital Region (pages 115-141).

This plan aims to: This is why the region and the BRIC have, for several years, been taking concrete actions to combat digital exclusion through the deployment of the free regional Wi-Fi network, wifi.brussels, new Public Digital Spaces (PDS) and renewed IT equipment.

The aim is to continue along this path in order to enable as many people as possible to take full advantage of digitisation in Brussels.

The full survey can be obtained by clicking here.
Relevant administration(s)
Back to news