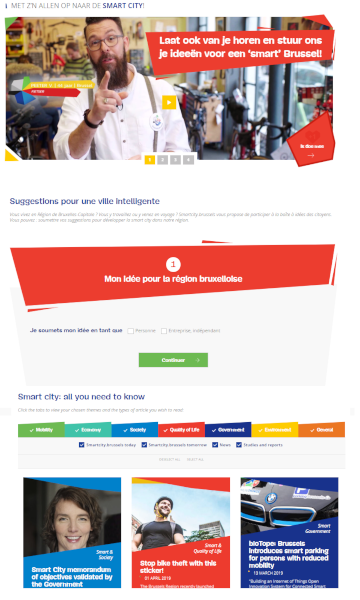 This week the Brussels Smart City team launched a campaign focused on citizen participation which will take place mostly on social media platforms.

The campaign aims to provide the people of Brussels with a mouthpiece to help them develop the region as a Smart City. To achieve this goal, the look and the layout of the website were altered. The result is a sharper focus on interactivity and thus the citizen!

The campaign did not come out of the blue, because it is aligned with the Regional Government Declaration for 2014-2019, which promotes, among other things, the digitisation of Brussels. The purpose of the Smart City strategy in particular is to leverage smart initiatives and modern technologies to ensure a stimulating and safe environment for all those who take part in everyday life in Brussels: citizens, academic institutions, companies and government organisations, with this campaign aimed at the first of these groups.

The driving forces behind the initiative are BRIC Brussels Regional Informatics Centre (represented by Smart City Manager Céline Vanderborght) and the Brussels Capital Region, which is coordinating the entire process all the way from communication to technical integration.
To explain to citizens how and why their input is so important, six videos were produced with each one reflecting one of the six Smart City domains: environment, quality of life, economy, mobility, society and governance.

The first video is already on the homepage and on our Facebook page, where a lot more is on the way. So stay tuned and be sure to leave your suggestion!
Back to news