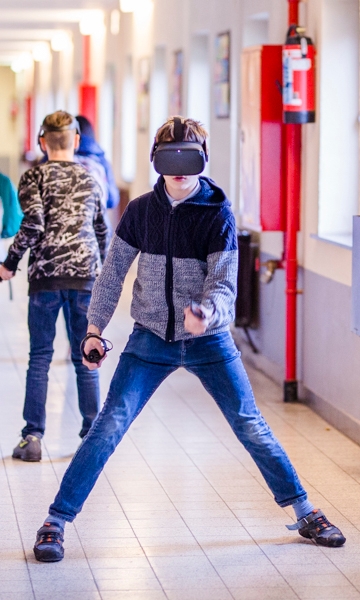 Our most recent event was a huge success!

On Wednesday 27 November the most recent Brussels Smart City event of the cycle took place, organised specifically to accommodate societal stakeholders. While previous Smart City events covered education, culture, economy and digital inclusion, last Wednesday was dedicated to high-speed Internet in secondary schools. Fiber to the School, a project run by the BRIC and implemented by IRISnet, was launched in 2014, and falls within the Multimedia Plan. It has made it possible to install optical fibre in all 175 Brussels secondary schools.

For the occasion, the BRIC and IRISnet organised a major event at the Athénée Royal Crommelynck in Woluwé-Saint-Pierre, with various activities for different target groups: students (adults and children), teachers and parents, and headmasters from Brussels secondary schools.

With themes ranging from cyber bullying and cyber security to screen addiction, 6th and 1st year primary students received tips on how to act and react during a live streaming workshop led by David Antoine. 5th and 6th year secondary students participated in a workshop on the professions of the future and the ever-growing role of IT.

Meanwhile, headmasters from secondary schools were finding out about the changes brought about by fast Internet in schools: best practices were shared and the opportunities opening up for schools were demonstrated! A range of solutions on the ground!

Various workshops were organised in the afternoon: a virtual reality escape room, a workshop to understand how a PC works, and coding workshops for young people. But parents and teachers were also involved. As such, two workshops were dedicated to them on the following issues: how to prevent and manage situations that can arise from children's use of the Internet (cyber bullying, etc.)? And how to communicate and support students in the digital age?

Finally, we could count on the participation of the MIC (Microsoft Innovation Center), who presented the Teams platform and Microsoft's educational tools.

"Bandwidth is no longer a problem," explained Hervé Feuillien, Director General of the BRIC. The aim now is to promote the use of this tool, particularly among teachers, but also in the context of communication between school headmasters, teachers, students and parents.