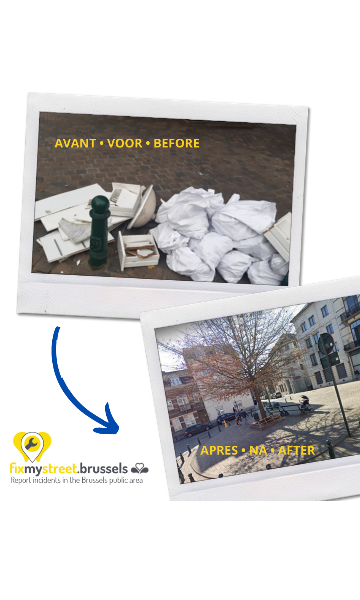 ​Fix My Street, now also for abandoned vehicles and tags

For those who are not yet familiar with it, the Fix My Street application allows citizens to report issues in public areas in the Brussels-Capital Region directly to the authorities.

Using Fix My Street, the Region's citizens can, for example, report problems with street lighting and traffic signs, or the presence of waste on the public highway. Incidents and problems for which the system improves the processing speed.

In order to improve the service for the people of Brussels, the teams behind the Fix My Street application have been working hard on new categories in recent months: for example, users will soon be able to find an "Abandoned Vehicles" category. While there was already an "Abandoned bike" category, this has now been integrated into a more comprehensive super-category including cars, scooters and mopeds.

The app's accuracy has also been improved. Roads, pavements, cycle paths, etc. the location of an incident can now be indicated explicitly.

Since it was launched in 2013, the popularity of this "Smart" service has remained strong with a record 70,000 reports in 2020, an increase of more than 16% on the previous year. Unsurprisingly, this increase is largely due to reports related to "Public Cleanliness" (fly tipping, broken/uncollected garbage bags).

Fix My Street is available free of charge from the Apple Store and Google Play. An online version is also available here.
Relevant administration(s)
Back to news