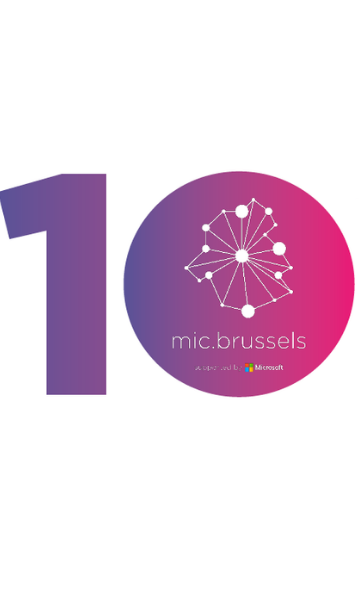 This month marks the tenth anniversary of my innovation center.brussels (mic.brussels). To celebrate, the public-private partnership between Microsoft and the Brussels Capital Region looks back on a decade of supporting Brussels-based companies, people and organizations in their digitization and use of technology. Through interviews with alumni, mic.brussels looks back with pride but also looks forward to the future in which the partnership will notably continue to support the digitalization of SMEs, offer AI training and create awareness about technology and innovation through new initiatives.

my innovation center.brussels (mic.brussels) was founded in 2011 as a public-private partnership between Microsoft, the Brussels-Capital Region, hub.brussels, Evoliris (now Digitalcity) and CIRB, the Center for Informatics for the Brussels Region. Under the pillars of Digitalization, Innovation and Training, the partnership helps people, businesses and organizations in the Brussels region to digitally transform, understand technology and adopt new IT tools. This is done through events, collaborations with the work field and formation initiatives.

mic.brussels became one of the first actors in the Brussels startup ecosystem with initiatives around IT and innovation, such as the Boostcamp, which between 2012 and 2018 helped startups to initiate their project, and the acceleration program Amplitude+ created with ICAB for growing startups. It also invested heavily in supporting and training job seekers and students over the past decade. Through preparatory sessions, it has seen more than 900 important IT certifications being obtained by candidates which helps them connect with the labor market. With its prototyping internship program, mic.brussels matches skilled and motivated Brussels IT students with promising IT companies and their innovative projects. In doing so, so far it has supported the learning path of 179 student developers, while at the same time boosting the companies’ businesses with the development of a Prototype or Proof of Concept.

Since 2011, the mic.brussels programs have contributed to the creation of about 450 jobs and more than 65 start-ups. The public-private partnership has set up over 1,500 sessions and supported almost 500 companies. In this way, mic.brussels has been making a strong contribution to the socio-economic impact of the technology sector on the Brussels-Capital Region for ten years now.

“Through complementary initiatives and solid expertise, mic.brussels creates added value for the Brussels IT sector and the SME community in general,” testifies Barbara Trachte, State Secretary of the Brussels Capital Region in charge of Economic Transition and Scientific Research. “The partnership manages to create a breeding ground for promising digital projects that respond to social, economic and sustainability-related challenges. I would therefore like to extend my heartfelt congratulations to mic.brussels on this anniversary and the journey it has already made.”

Didier Ongena, General Manager at Microsoft Belgium & Luxembourg: ” The mic.brussels plays an important role in the Brussels’ digital ecosystem. Thanks to collaborations such as these, we can together inspire and empower people and businesses – help them understand, anticipate and adopt technology. The numerous skilling and social entrepreneurship initiatives driven by the mic.brussels this past decade, are great examples of that.”

Alumni in the spotlight

To mark this anniversary, mic.brussels is putting ten alumni of the program, men and women, in the spotlight. Through podcasts, articles and (video) interviews, they share their experiences and testify how mic.brussels has played a role in the overall success of their digital journey. In addition, mic.brussels has also launched a digital guestbook for key stakeholders such as past and present board directors, members and ministers.

mic.brussels is now looking ambitiously to the future. On the one hand, under the motto #TheFutureLivesInBrussels, it continues to focus strongly on supporting SMEs in Brussels and creating awareness about technology and innovation. On the other hand, the mic.brussels keeps on exploring new initiatives. Jean-Louis Van Houwe, chairman of the board of directors of mic.brussels and CEO of Monizze: “Sustainability is becoming an important feature of the future. In the coming months, with a training course on ‘green IT’, the partnership will give developers insight into how data and energy consumption of applications and web software can be optimized.”
Relevant administration(s)
Back to news