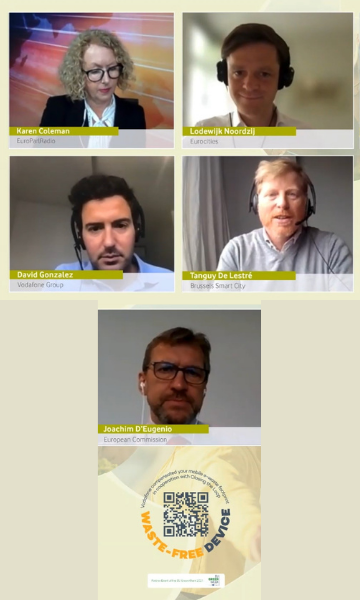 The EU Green Week took place from 31 May to 4 June. Held virtually, this 2021 event was dedicated to the "Zero Pollution Ambition" and to raising awareness among all stakeholders and citizens of how to join forces to create an environment free of pollution and toxic substances. A number of conferences took place, of course, including one organised by the telecommunications group Vodafone on the role of digital technology in Europe's green ambitions. Tanguy De Lestré, Smart City Advisor for the Brussels Region, spoke at the panel dedicated to smart cities!

According to a recent study by the European Public Health Alliance, air pollution costs each European €1,276 per year, or €385 million per city on average. Not to mention the fact that there could be as many as 340,000 contaminated sites in Europe, according to the latest estimates from the European Environment Agency. Their management could cost €6.5 billion per year.

Vodafone Belgium's goal in hosting an event entitled "Digital for Green: Helping to prevent air and soil pollution" during EU Green Week was to hear from various experts on how technology could improve air quality in cities by optimising traffic flow, and reducing congestion and waste. Participants were able to discuss how digital innovation can contribute to smarter farming and, in particular, the role of precision farming in reducing the use of pesticides and fertilizers. Acting in this way means using digital technology to support the Green Deal!

A smart city obviously considers itself sustainable and therefore saves energy, water, raw materials, food and financial resources, so it can continue to prosper in an era of transition, while reducing its polluting emissions. Alongside Joachim D'Eugenio, Senior Expert at the DG ENVI of the European Commission, Lodewijk Noordzij, Digital Policy Officer at Eurocities, David Gonzalez, Head of Big Data at Vodafone Group, Mr De Lestré had the opportunity to share several concrete examples, such as the creation of the Low Emission Zone (LEZ), the Brussels Air Quality app of Brussels Environment or the recent Curieuzen'Air initiative, and to talk more generally about our Region's Smart City ambition.


Relevant administration(s)
Back to news