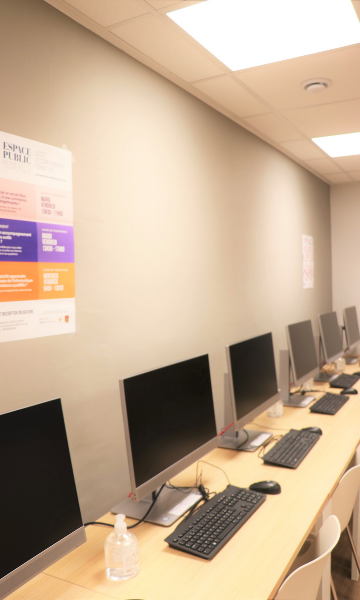 A new Digital Public Space opens its doors in Ganshoren to improve IT training!

The objective of a Digital Public Space is to ensure that no one is left behind in digital technology. It is crucial for citizens who do not have a PC, printer or other computer tools at home, yet need them.

Job-seekers, students, ... In the coming days, Ganshoren residents who wish to increase their digital skills will be welcome in the municipality's new DPS, located at 66, Avenue de la Réforme. They will be able to find training and workshops, from a basic computer course to training in specific software.
The new DPS was officially opened on 9 September. After a welcome by Mayor Pierre Kompany, the alderman in charge of the Smart City, Mr Stéphane Obeid, presented the premises to the assembly.

The Brussels Minister for the Digital Transition, Mr Bernard Clerfayt, then took the floor to remind us of the challenges that the Brussels Region will have to face in the coming years in terms of digital inclusion. For example, the Region must ensure that its various administrations integrate the changes brought about by digital technology, adapt their working methods and, above all, support citizens in their use of digital public services.

To improve the digital skills of all Brussels inhabitants, the Region will also rely on better quality control for the Region's DPSs and the development of mobile actions in nursing homes, at home, etc. A list of actions and objectives is clearly set out in the Digital Appropriation Plan adopted a few months ago by the Brussels Government.

This new space was also opened in the presence of the members of the College of the Burgomaster and Aldermen, the President of the Ganshoren Public Centre for Social Welfare (PCSW), the Presidents of the cultural centres, the municipal councillors and the PCSW councillors, as well as the Digital Inclusion Coordination of the BRIC, which has been entrusted with the implementation of the Digital Appropriation Plan.
Relevant administration(s)
Back to news