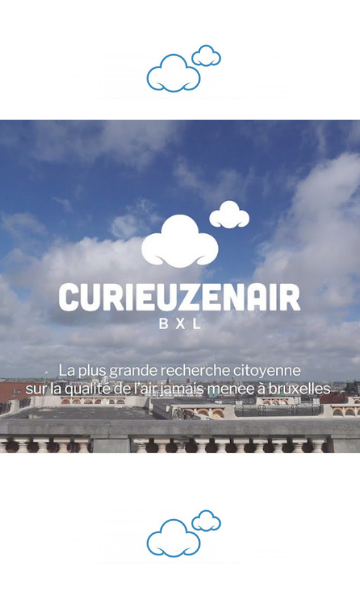 CurieuzenAir: what is the air quality in your Brussels street?

CurieuzenAir, the largest citizen science operation ever conducted in the Brussels-Capital Region, has delivered its results. Although there are strong disparities between districts, the study proves that almost all Brussels residents live or work in an area with too much pollution. Let's dive into the maps, analyses and lessons we can learn from this wide-ranging study.

From 25 September to 23 October 2021, some 3,000 Brussels inhabitants took part in the CurieuzenAir operation, a large-scale citizen survey on air quality in the capital, initiated by the University of Antwerp, the Brussels Environment Council and the Université libre de Bruxelles, in close collaboration with Brussels Environment, De Standaard, Le Soir and BRUZZ. The programme, supported by Bloomberg Philanthropies' Brussels Clean Air Partnership, is inspired by similar operations in Antwerp in 2015 and Flanders in 2018.

Brussels citizens measured the concentration of nitrogen dioxide (NO2) in their street using small tubes hung on their façades.

Researchers at the Université libre de Bruxelles (ULB) compared the CurieuzenAir data with the socio-economic characteristics of different districts. "The three districts with the best air quality in the region are located in Uccle, and the three with the highest NO2 concentration are in the city centre and near the Small Ring," explains Dirk Jacobs, professor of sociology at ULB.

According to the expert, densely populated districts are often worse off in terms of air quality. The study also found a clear link between income and the air quality of the place of residence, as the poorer the district, the worse the air quality. "Ironically, this also means that in districts with fewer cars per household, air quality is still worse due to the impact of nearby traffic," he adds.

A more detailed analysis of the results shows that 34 points are above the European standard of 40µg/m3 (micrograms per m3) and that the majority of these points are located within the City of Brussels.  Moreover, the closer we get to Brussels city centre, the higher the nitrogen dioxide (NO2) pollution. Unsurprisingly, it is in the vicinity of the Sonian Forest that the air quality is the least affected. Moreover, only 1.61% of Brussels residents (19,641 people) live or work in air that meets the WHO threshold value of 10 µg/m3.

The analysis shows an overall improvement in the situation compared to previous data, but still shows a significant impact on health, and a marked contrast between green, affluent districts and socio-economically vulnerable districts suffering from high traffic levels. This significant improvement in two years, and especially compared to ten years ago, is explained by the researchers involved in the process as a "coronavirus effect", which led to teleworking, and by the increasingly clean car fleet, increased bicycle use and the LEZ (low emission zone).

The lowest NO2 concentration (6.2 µg/m3) was found in the middle of the Sonian Forest, a place free of traffic emissions. The lowest NO2 concentration in a residential area (8.1 µg/m3) was measured on a façade on rue Chant d'Oiseaux in Anderlecht. According to CurieuzenAir, this value indicates that there are also residential areas in Brussels with excellent air quality.

The highest measurement value (60.5 µg/m3) was recorded along Boulevard de Nieuport, but some measurement points along the Small Ring also exceeded the 50 µg/m3 limit. These high values are due to a combination of heavy traffic and poor air circulation due to high-rise buildings.

To find out the air quality of a specific street, go to the following interactive map: https://www.lesoir.be/cartecurieuzenair
Relevant administration(s)
Back to news