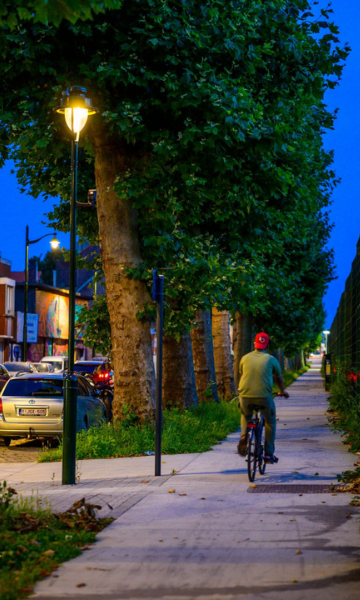 The Alphonse Vandenpeereboom cycle path in Molenbeek is now equipped with intelligent lighting using "light bubbles" that follow cyclists and pedestrians on their journeys. A pilot project that will reduce the energy consumption of municipal street lighting on this 1 km stretch by 20%.

Thirty-seven motion detectors were installed on the LED public lighting poles along the cycle path. When they detect the presence of a pedestrian or cyclist at night, these sensors transmit the information to the intelligent lighting management programme, automatically increasing the intensity of the luminaires surrounding the user. This "light bubble", barely visible to the naked eye, follows them on their journey at the speed they are moving, thereby reducing energy consumption by 20% (the equivalent of half a household’s annual energy consumption in Brussels). This project is lead by the municipality of Molenbeek-Saint-Jean and Sibelga, in close cooperation with its partner EQUANS.

AN INNOVATION IN INTELLIGENT LIGHTING

Having luminaires that are activated when users pass by is not new. Pedestrian crossings in Sint-Pieters-Woluwe have been equipped with presence sensors for some time. However, these sensors only activate the luminaire to which they are connected. With the deployment of intelligent lighting in Brussels, it is now possible to activate several luminaires simultaneously and increase their intensity based on the information transmitted by each sensor. A "bubble" can thus be created around the user, following him or her much more precisely and smoothly along their way.

The Alphonse Vandenpeereboom cycle path is the first in Brussels to benefit from this light bubble system, but other similar projects are already planned. Other requests have also been submitted for several eco-districts in Brussels, including the Charmille eco-district in Woluwe-Saint-Lambert.